A Recession - New or Old News?

It seems that there is now broad consensus of market commentators and economists that we are heading into a recession in Canada, the United States, and Europe sometime in the near future.

This all comes as many investors have seen significant declines in their portfolios so far in 2022.

For all the bad news that we have had to digest this year regarding the markets, geopolitics, war, inflation, and interest rates - investors can't be blamed for wanting to throw their hands in the air at this point.  Recession?  That must mean even more pain for my portfolio.  It's time to get out.

But what if the prospect for a recession is already reflected in market prices?

Now that we are nearly 10 months into this "death-by-1000-cuts" bear market, you may be looking at me a little bit sideways when I say that a lot of the bad news around a possible recession, among other fears, is already priced into the market.  How is this possible?

Recessions can only be declared retroactively

Employment, consumption, and gross domestic product data needs to be collected and analyzed before determining whether a recession is, in fact, taking place.  That information takes time to collect, verify, and report on.  Consequently, a recession can only be called in hindsight and with a significant delay attached to it.

This is a chart from Dimensional Fund Advisors describes the behaviour of the S&P 500 following the announcement of a recession.  In 4 out of the previous 6 recessions, the market was months into its recovery by the time that the recession was officially called (full article here).

Markets are inherently forward-looking.  Market participants are collecting all of the information available, estimating its impact on stocks and bonds, and setting new prices through trading activity.

And the markets have had most of this year to digest two of the most significant news events for the year that have a direct impact on our economy.

1) In the matter of a few short months, inflation went from being a thing that we nearly forgot about to the most pressing financial issue for most middle-class Canadian families, rising at rates we haven't seen in 40 years.

2) Central banks went from declaring inflation temporary (transitory is the word they used) to being a significant issue, kicking off the most rapid and aggressive rate hiking cycle we have seen in decades.  This has pushed borrowing costs significantly higher for many Canadians, which could threaten to tip the country into a recession.

And, in turn, markets have discounted that information accordingly - driving current prices down and driving up the future returns that investors are now demanding to hold those assets.

These say nothing about the ongoing war in the Ukraine and its impact on European and even global security, and asset prices by extension.

See below the year-to-date returns of the following Canadian stocks and bonds as of September 30, 2022  (data source is DFA Returns Web)

So if we acknowledge that there is a significant risk of a recession, is it at all possible that some of that risk is already priced into risky assets like stocks and bonds?

The Case for a Big Reversal to the Upside

If it is possible that the market has already priced in the chance of a recession, in Canada and abroad, what could cause the markets to dramatically shift upward?  Here are a few candidates in my mind:

1) A lighter inflation reading for 1 or 2 months.  A lot of the market's big moves downward this year have coincided with inflation news and central bank commentary that is worse than expected.  I think that a couple of inflation readings that come in better than expected may change investors' expectations about inflation in the near term, which could be a tailwind for stocks and bonds.

2) Recession either doesn't occur or it is milder than expected.  While a lot of people are calling for a recession, it is not a foregone conclusion.  If corporate earnings remain strong, companies don't need to make significant layoffs, and interest rates moderate, these are forces that could allow a recession to be either mild or averted altogether.

3) A de-escalation of the war in Ukraine.  It feels like a lot to hope for, but I believe that some good news in the Ukraine may have a positive impact on stock and bond prices.

Of course, all of these are hypotheticals.  None of them have been priced in yet because they haven't happened.

To be fair about this, we also need to consider the possibility that the news could get worse before it gets better.  Inflation could remain high and even go higher, causing central banks to need to do even more rate hiking than is currently expected.  A recession, therefore, could be worse than is currently expected which could potentially push asset prices even further downward.  Again, these are hypotheticals at this point - the market can't price this in until there is more evidence that this is the more likely path.

So What Can We Take Away from This?

So, how do we use this insight to make decisions about our long term investments?

You can look at history as a guide for information you can use.  Historically, markets have responded well following crises.  So one approach you can take is simply to hope that we experience a similar advance coming out of this current recent set of crises. (Chart Source: Dimensional Fund Advisors) 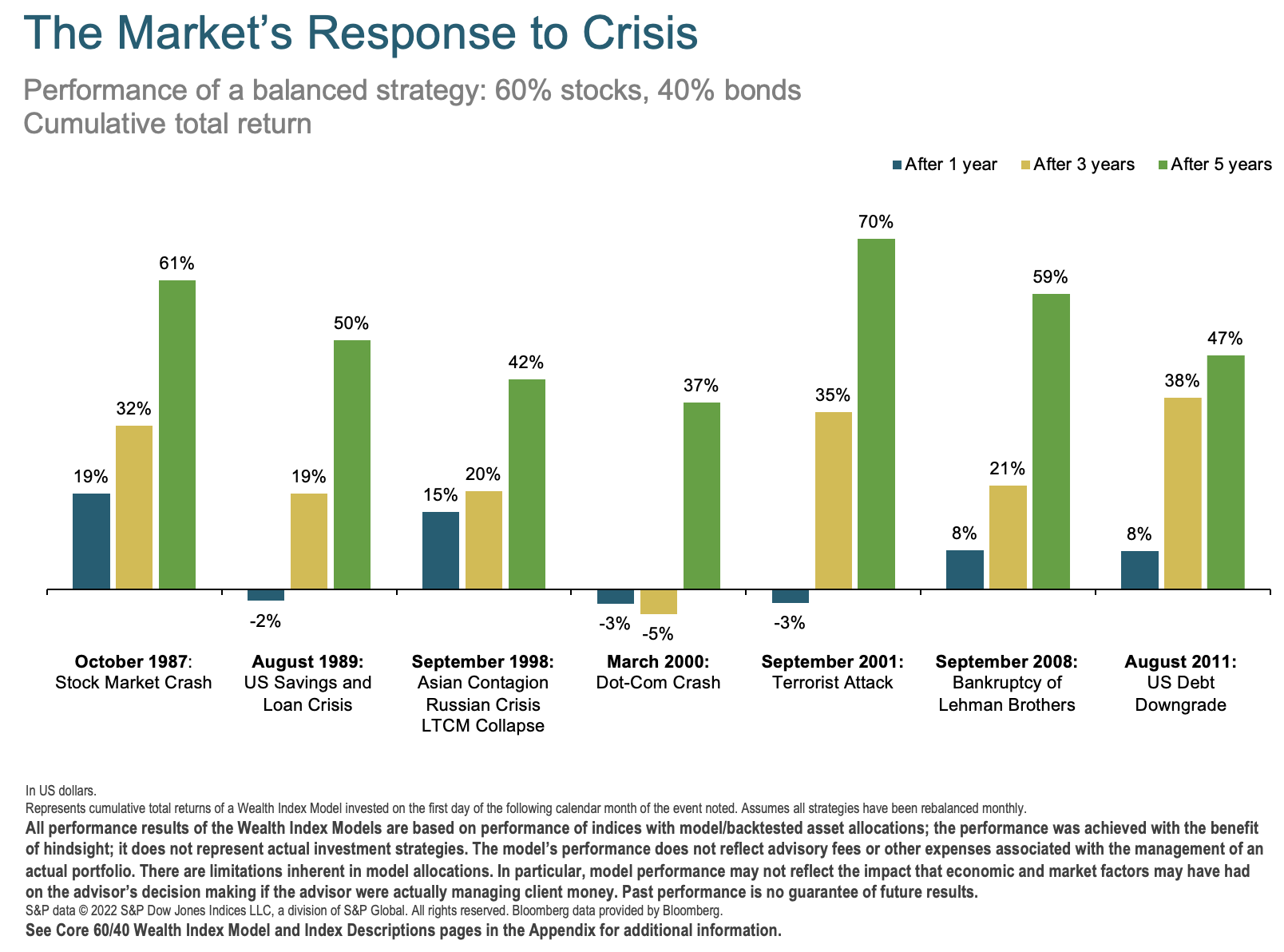 But, this is simply a tactical/near term perspective.  This can serve us well in getting us through a difficult year in the markets, but our investing journey is likely going to last for several decades.

Preferably, you can look at your portfolio in the context of a 30 or 40 year investment and financial plan and accept that markets rise and fall intermittently and that eventually this too shall pass. (Chart Source: Dimensional Fund Advisors) 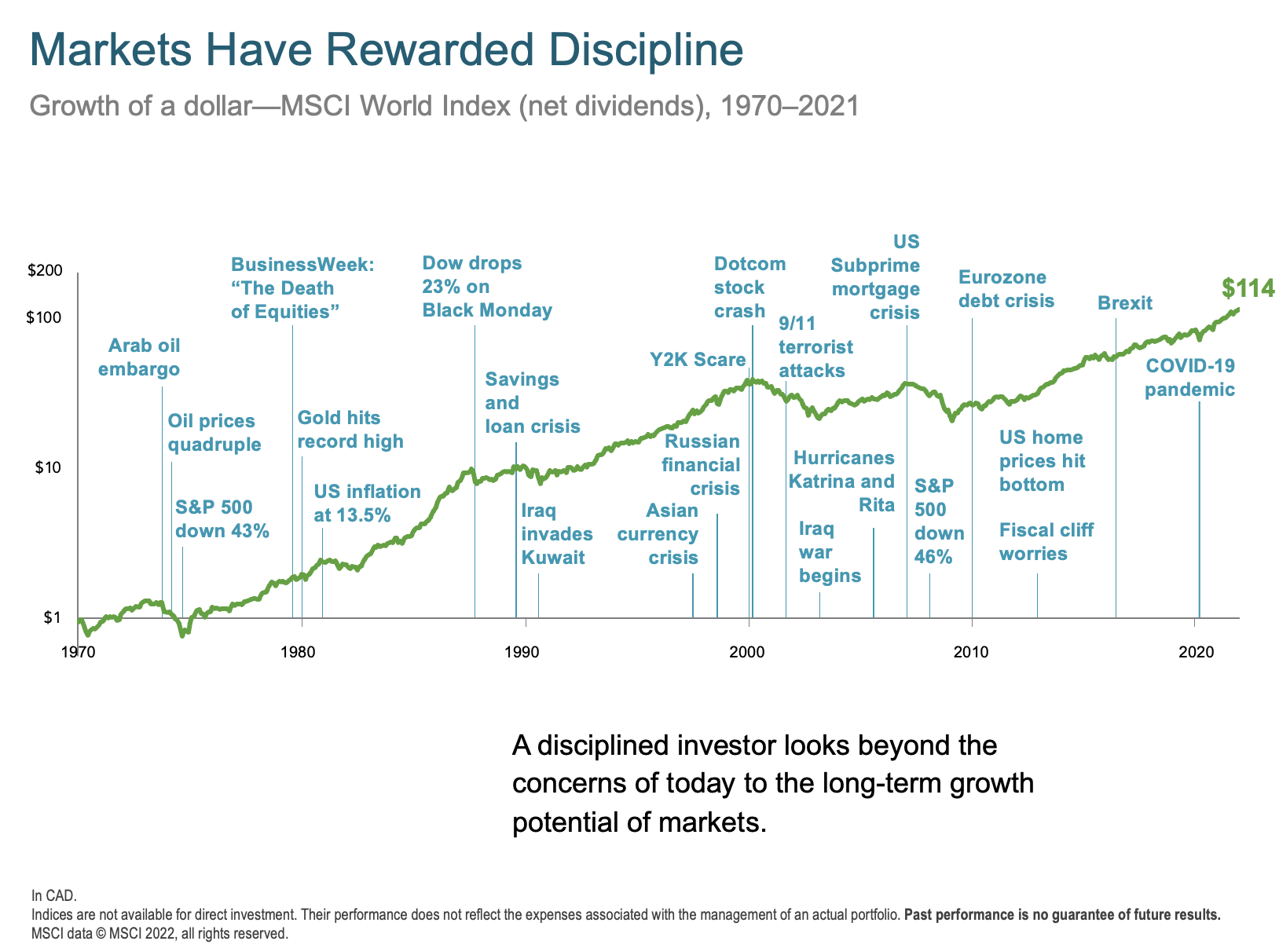